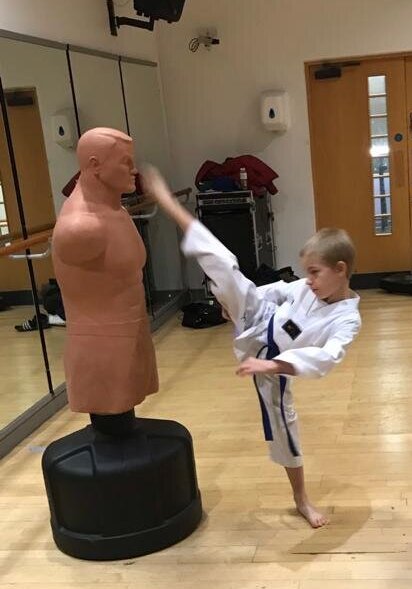 Taekwondo is a martial art originating in Korea. It is the most widely practised martial art in the world and is the national sport of Korea, as well as an Olympic sporting event.

Taekwondo loosely translates as "the way of the hand and the foot."

The sport emphasises a variation of kicks and incorporates punching, strikes and blocks. This is because practitioners feel that the leg is the strongest part of the body.

It is a discipline of entire body training and character building, as all members are required to learn Korean terms and develop many skills through light contact sparring, belt grading and competitions (optional). As it provides a full body workout taekwondo is favoured by women and practised by all ages.

If there is a difference between taekwondo as a sport and tas an art, it is that the art recognises no rules for combat while the sport of taekwondo is highly regulated for the safety of it participants.
As an art, taekwondo focuses on a combination of combat techniques and self-defense as well as being a good form of exercise and entertainment.

In taekwondo, a system of attacking and defensive movements incorporating punching, kicking and blocking techniques as well as differing stances is done in a set sequence and is referred to as Poomsae. These basic movements bring together all the martial art skills in a graceful yet powerful manner.

Poomsae forms a significant part of the promotion process in Taekwondo and practitioners must be able to demonstrate a good understanding of the arrangements before that can progress to the next rank.